The Innovation Difference Between Microsoft & Amazon?

Does Microsoft need to think more like Amazon? Today, I came across this piece in Harvard Business Review that compares Microsoft to Amazon. It points to MS as an example of the old, profit-centric approach to business while Amazon represents a new, ever-evolving approach based on maximizing growth. They even give us a snazzy diagram […]

Today, I came across this piece in Harvard Business Review that compares Microsoft to Amazon. It points to MS as an example of the old, profit-centric approach to business while Amazon represents a new, ever-evolving approach based on maximizing growth.

They even give us a snazzy diagram to show the different approaches: 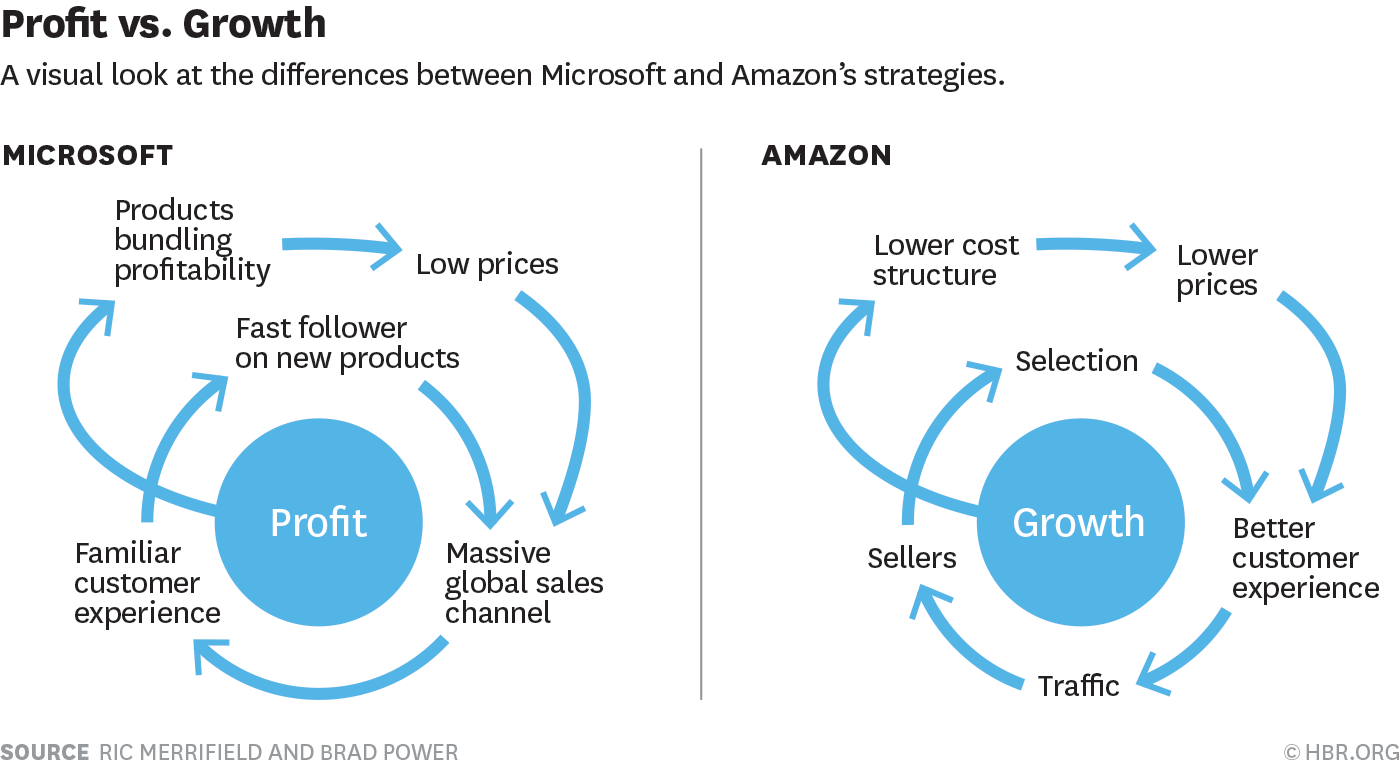 In the article, we learn that Microsoft fell into the “profit-trap”: focusing on profitability and returning value to shareholders, this caused MS to stop investing in innovation. In contrast, Amazon has continued to invest and experiment like a startup.

The gist of the article is that Microsoft needs to start investing and innovating again, and that Amazon might be a model for what that looks like.

I agree with the article overall, but I’m squeamish about looking at Amazon as the poster child for a new business paradigm.

What is Amazon Building?

No doubt, Amazon continues to invest and grow. But I’m not sure how much of that is innovation and how much is just spotting the weak like any good predator.

All due respect to AWS, but how many other places do we see Amazon doing something that pushes technology forward? Yes, robots in the warehouses are cool, and same day delivery will make our lives easier. But are we talking about innovations or the power of large-scale capital investments? I’d say these are the opportunities open to a company that is given a pass on profits, and so can continually outspend competitors on infrastructure.

This line from the HBR piece stood out to me:

But the contrast has come to favor Amazon. Many people in Silicon Valley see Microsoft as irrelevant today, while Amazon investors focus on its future growth.

The 20-year (and counting) business plan of Amazon is not something that most companies could get away with. Many companies are given time to build marketshare or develop new markets. But Amazon was able to position it self as a company where the payoff is always in the future.

What Could Microsoft Do?

HBR points out that Satya Nadella is pushing for more investment and more technology investments at Microsoft. And a while back, I wrote about Microsoft was opening up to the mobile web, to open source and to the idea of being a tech community member instead of a curmudgeon.

I think that the current Microsoft approach: new price points, more partnerships, investments in the cloud and some cool things like HoloLens are the best we should expect from any company that isn’t named Amazon. But the expectations aren’t different because Amazon is so much more innovative than old man Microsoft. The expectations are different because Mr. Bezo’s positioned his company as a play for the future instead of next quarter. Now we all just have to wait for the future to arrive.